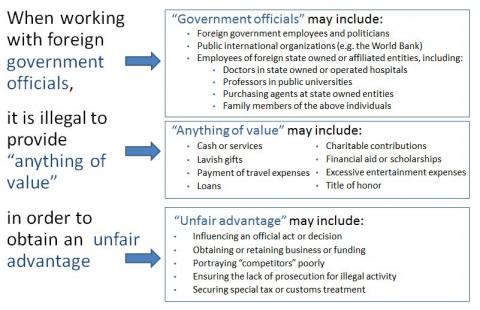 Enforcement of the FCPA is an ongoing priority for the US Department of Justice.  In 2017 alone approximately $845 million in fines and penalties were levied against multiple companies for violation of the Act.  However, the DOJ is increasingly targeting individuals (rather than their employers) for such violations.

Duke University, Duke University Health System and their affiliates engage in activity around the world.  As part of its commitment to ethical conduct, those whom Duke has employed or engaged to speak or act on behalf of Duke must comply with the FCPA, United Kingdom Bribery Act (UKBA), and other applicable anti-bribery and anti-corruption laws and regulations.

Please contact the Office of Export Controls if you have questions that are not answered by the Frequently Asked Questions below.

Q.  Which Anti-Corruption Laws are applicable?

A.  The two laws most relevant to Duke activity are the U.S. Foreign Corrupt Practices Act (“FCPA”) and the United Kingdom Bribery Act (“UKBA”).  In addition, many countries and jurisdictions have also instituted their own Anti-Corruption Laws.  You should become knowledgeable about any local Anti-Corruption Laws before engaging in activity with individuals or entities outside the United States (even if you remain in the United States).

Q.  Whom does this apply to?

A.  The FCPA applies to "domestic concerns" - any individual who is a citizen, national, or resident of the United States, or any corporation, partnership, association, joint-stock company, business trust, unincorporated organization, or sole proprietorship that is organized under the laws of the United States or its states, territories, possessions, or commonwealths or that has its principal place of business in the United States; officers, directors, employees, agents, or stockholders acting on behalf of a domestic concern are also covered.

The FCPA can also apply to foreign persons or entities that either directly or through an agent engage in any act in furtherance of a corrupt payment (or an offer, promise, or authorization to pay) while in the territory of the United States.  Also, officers, directors, employees, agents, or stockholders acting on behalf of such persons or entities may be subject to the Act.

Q.  Who do I call with questions?

Q.  How do I report a potential violation of this policy?

A.  Report actual or potential violations to your supervisor, or if you are not comfortable with reporting there, contact the Duke University Compliance & Fraud Hotline at 800-846-9793.

Q.  What are common situations that might be Bribes?

A.  Examples of common Bribes include:

Q.  Who are typical Foreign Officials?

A.  Typical examples of Foreign Officials include:

Q.  What are reasonable payments to Foreign Officials?

A.  Examples of reasonable payments for services include, but are not limited to:

Q.  Must a foreign official actually accept a bribe in order for an FCPA violation to occur?

A.  No.  Wherever corrupt intent is present (i.e. the intent to improperly influence a foreign official), the FCPA prohibits paying, offering, or promising to pay money or anything of value (or authorizing the payment or offer).  By focusing on intent, the FCPA does not require that a corrupt act actually succeed in its purpose.  Nor must the foreign official actually solicit, accept, or receive the corrupt payment for the bribe payor to be liable.

Q.  When do I give a third party actual or apparent authority to be an Agent for Duke?

A.    Actual authority is pretty straightforward.  It is given in a written document which says that a person can speak for or in the name of Duke.

Q.  Are there special concerns with Advisory Arrangements?

A.  Advisory Arrangements, such as those under which Duke is paid for providing its educational expertise or exploring an operations partnership, are a common scenario where agency concerns should be considered more carefully.  The preferred method to manage this risk, when it exists, is having a written and signed document which disclaims this authority.  If the intent is to provide such authority, Due Diligence steps are required.

Q.  What are examples of third parties that are not considered Agents for the purposes of this policy?

A.  Examples of third parties that are not considered Agents include:

Q.  What are the limits for meals?

A.  Meal expenditures must be modest and reasonable.  As a guideline, reasonable expenditures would generally not exceed three times the published U.S. Government Services Administration rates for domestic meals or two times the published U.S. State Department rate for international meals.  To find the GSA and State Department rates for meals, use the links below to first find the appropriate M&IE rate (Meals and Incidental Expenses) and then the breakout of the M&IE rate by meal:

You must obtain prior written approval from the Duke University Office of Export Controls before providing meals more than 4 times per year to the same Foreign Official.

Q.  What does Due Diligence include?

A.  At a minimum, due diligence should include gathering information to determine the actual and beneficial owners and key employees of an Agent which is an entity; the Agent’s relationships with Foreign Officials; whether an individual Agent or its actual or beneficial owners or key employees of an entity Agent are current or former Foreign Officials or appear on relevant government watch lists; and whether there are any compliance “red flags” that require additional investigation.  In addition, due diligence should include checking the Agent’s references and verifying its qualifications.

Q.  When conducting Due Diligence on potential Agents, what government watch lists should be checked for the names of the actual or beneficial owners of the Agent and its key personnel?

A.  The Office of Export Controls and Anti-Corruption Compliance can assist with this screening.  This office can be contacted by email to export@duke.edu with the names of any government officials, instrumentalities, or organizations thereof.  The lists reviewed should include:

Q.  When conducting Due Diligence on potential Agents, what are “red flags”?

A. “Red flags” are compliance issues that must be addressed before proceeding with a transaction.  Red flags are very fact-specific, and they are not necessarily violations of the FCPA, but they do require additional investigation and analysis.  “Red flags” include:

Q.  What limitations exist on how Duke can pay Agents?

A.  No payment to any Agent shall be made or delivered (1) in cash (other than documented petty cash disbursements); (2) with corporate checks payable to “cash,” “bearer,” or third-party designees; or (3) to an individual, entity, or account outside the recipient’s country of residency.

Q.  What anti-corruption provisions should be included in contracts with Agents?

Q.  When may Duke provide travel to Foreign Officials?

A.  Duke may provide travel to Foreign Officials only if that travel is directly related to the promotion, demonstration, or explanation of Duke’s business or related to Duke’s execution or performance of a contract with a non-U.S. government or agency.

Q.  What type of travel may Duke provide to Foreign Officials?

A.  All travel must comply with Duke’s travel policy.  Duke may not provide a class of travel to Foreign Officials other than the class of travel that would be available to Duke employees under the same circumstances.